Back in the very early Spring, I started looking for some summer inspiration, and I came across a picture of a young lady in a pencil skirt and shirt.  Truth be told, there were plenty of images of pencil skirt + shirt.  But this particular one was not just any pencil skirt – this one was white and blue toile.  (I could have sworn that I saved it on Pinterest, but apparently not.  You’ll just have to trust me on this one.)  This seemed like a pretty good starting point to a summer “uniform”.  I find pencil skirts comfortable and most importantly – I can function in them all day, unlike some rather voluminous skirts that I have that seem to always get in the way when I’m trying to do certain things.  So – a plan.  I became a bit obsessed. A bit too much time spent on internet “research” for fabric, because I had nothing that looked anything like the picture.  Neither did I find anything remotely similar or pencil skirt compatible on any of the sites that I browsed.  Then at some point between lockdowns, when Fabricland was actually open, I decided to go for a browse.  Nothing sparked my imagination – I must have made the rounds of the “fashion fabrics” at least twice.   Feeling like my balloon had deflated, I headed off to the home dec section and there I spied the elephant print – well, it’s not just elephants – rather a whole African menagerie. 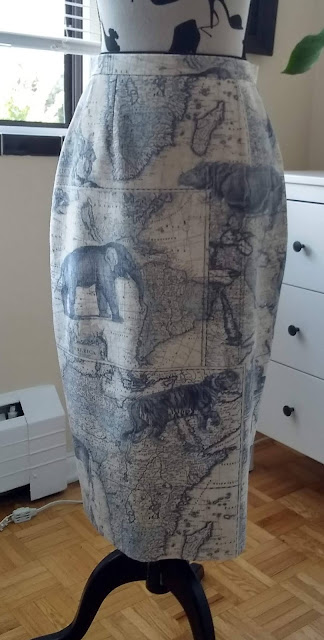 100% cotton … a little bit stiff … but I was sure that after a run through the washer and drier it would work quite well.  Oh – and the price was right … $5 per metre.

Unfortunately (or may-be fortunately) I didn’t stop at 1 metre of one fabric.  I found 3 more!  If I was going to adopt a uniform for summer, I certainly needed more than one skirt for the purpose.

I used my self-drafted pattern – midi length.  Made slight changes in the way I finished the back slit/ pleat and waistband – it would be way too boring if I made exact duplicates.  So - three skirts happened in fairly quick succession.

Number 4 is on a black background, and after No. 3, being quite sick of pencil skirt sewing, I decided that the dark fabric would have to wait until Autumn. Now as for the shirts to go with the skirts … they’re not hopping from fabric stash to closet at quite the same speed.  Shirts take longer to sew than pencil skirts, and apparently I can’t keep motivated stitching the same shirt in different fabrics one after another.  About the progress on those … later.

Email ThisBlogThis!Share to TwitterShare to FacebookShare to Pinterest
Labels: skirts