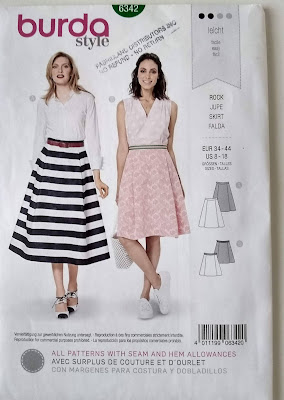 This has got to be one of the easiest patterns around.  It is also a quick way of using up yardage if your objective is to use up fabric stash with little effort.  One pattern piece for both the front and the back, plus waistband.  Oh – I guess you have to like skirts…  I happen to wear skirts a lot, and I also happen to like full skirts.  Check and check.  The big pleats front and back lie flat -  no extra fluff below the waistband.  And the only place you really have to nail the fit is the waistband.

The suggested fabrics on the envelope are somewhat stiffer fabrics, so of course I did the complete opposite for my first version … a very drapey rayon challis.

According to the instructions, the zipper goes up into the waistband – not something I like, so I stopped the zip at the waist and opted for hooks to keep the waistband together.  Granted, that did require extending the waistband piece a little to allow for overlap. 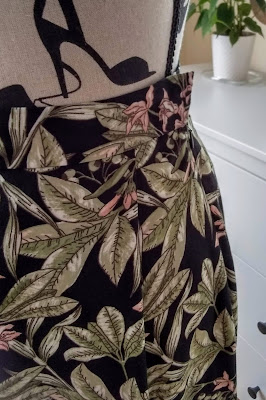 And then there was version two - just because the first one went together so quickly.

This is a hand-woven silk from Thailand.  The interesting stripes and horses are all uneven … and the fabric was incredibly narrow.  Not a hope of ever making anything match at the seams.  If I didn’t just cut and make something, that fabric would languish for many more years, and it really did need to get out in the world and be something.  So – I did have to put a seam down centre front and centre back just to get the width needed for the pattern piece.  I did the best I could to more or less have all the horses galloping in straight rows. 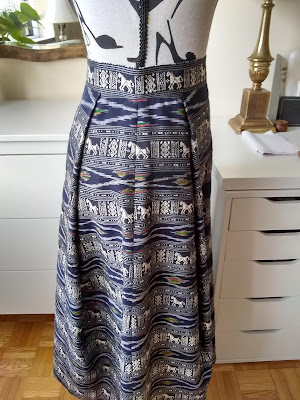 I just ignored the parts where the stripes wouldn’t behave.  Now that it’s made up – I wear the skirt and don’t look at the seams.  And because it is a rather heavy silk, this skirt does work well year-round – with sandals in summer and boots and sweaters in winter.  Not exactly an everyday skirt, so not too many chances of it going out into the world, but it has had some wears – unlike my third version … 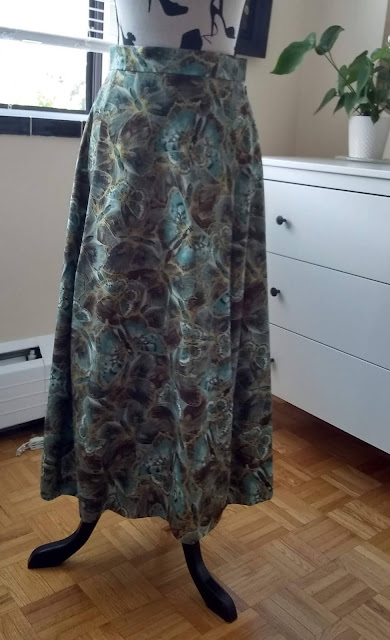 Before I folded up the pattern and put it away, I decided that one more version wouldn’t be amiss.  This is quilting cotton.  I just fell in love with these butterflies, despite the fact that the turquoise isn’t something that I normally gravitate towards.  And – there’s some gold throughout – just enough to make this a “party skirt”, and I knew from the outset that this was going to be a skirt.  Never mind that everyone else buying this fabric was cutting it up for quilts.  I did not prewash the fabric.  I was warned by those who are wiser than I in the ways of quilting fabrics that the gold would wash out, and I did know that the sizing, which gives it a bit of gloss, would also disappear and the character of the fabric would be ruined.  So yes, I made a party skirt just at the time when all parties came to an abrupt halt, and my poor skirt has not been outside my closet since it came into being.  May-be now that we can more or less “normally” go to church, I could give it an outing on a Sunday morning – with boots and a sweater … but there are so many other things that are clamouring for an outing.  We’ll see.
Posted by Irene at 9:41 PM