About time I crawled out from under my rock, stopped just lurking on the internet and got back to actually posting on this blog.  We’ll skip the explanations of why I’ve only been lurking and how it’s (for some crazy reason) embarrassing to get back to actually documenting what I’ve been sewing.  I know that I have to improve my photography.  (Haven’t I mentioned this more than once before?)  Bear with me.  And for starters, we’ll go with something that I already have pictures of – no matter how bad.  The shirt was a Christmas present, so no chance of retakes on the pictures – it’s at the other end of the country.

Son’s favourite pattern happens to be the Victorian Shirt from Folkwear Patterns.  This time I thought I’d introduce him to the joy of wearing linen, which also meant that I could order from a site that I’d been drooling over for a while – Pure Linen Envy.  Sent a link to D – he chose a colour.  (And yes, I just happened to order a few more pieces than what was needed for D’s shirt.  Had to have “samples” of the 3 different weights of linen that Pure Linen Envy carries.  Further linen projects yet to be sewn – hopefully in the next few months.) 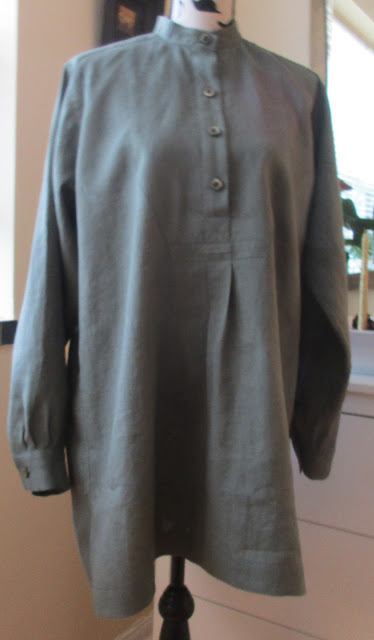 This is their mid-weight fabric called “Summer Breeze Linen”.  Sorry – can’t remember which particular green this is – not that you can even tell it’s green from my pictures.  Perfect for this shirt. 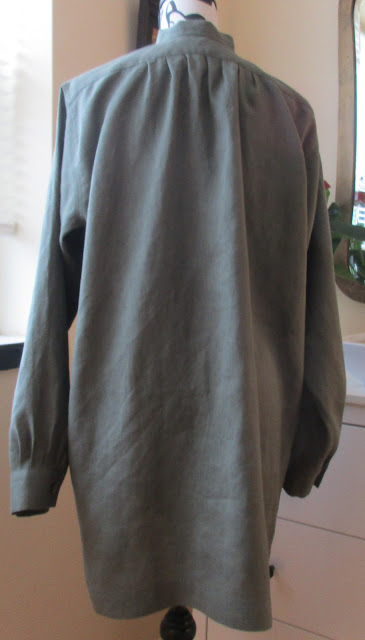 Nothing new here.  I’ve made this at least twice before.  Although, every time I have to scratch my head at the way the front placket is finished at the bottom.  I really should make some notes on the pattern instructions for my way of doing it.  (Keep me from scratching my head.)

And … drumroll, please … I was actually sent a photo of real person wearing shirt (that would be my son)!  And … you can actually see that it is a green shirt.  Now … I happen to think that the sleeves should be a bit shorter, and the whole shirt could be a bit shorter. (We had this discussion while I was on a visit to the wilds of B.C., and I was poking my nose into my son’s closet.)  According to my son – he likes the pattern as is, and I’m not to change a thing.  I won’t argue. 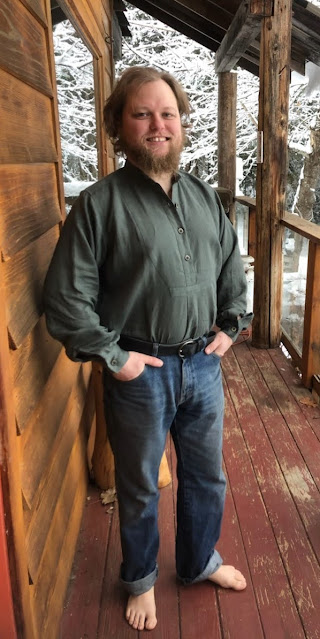 Whenever I send a shirt (or some other article of clothing), I always include a little card with extra thread and extra button. 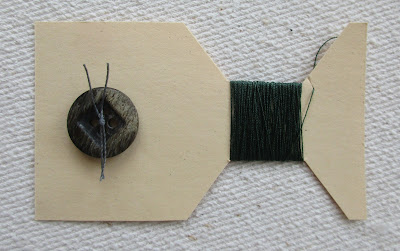 Whether they are ever needed or used, I don’t know, but at least I’ve done my duty to make sure that the shirt doesn’t have to bear the ignominy of sporting a mismatched button.
Posted by Irene at 8:43 PM